Its been a very long time and no post – a few years in fact. Its been difficult to keep tabs on ‘post apocalyptic’ happenings in the media just because there has been so much of it. As far as my own voice was concerned, I felt like I didn’t have too much new to offer with so much new post apocalyptic work being done in the arts. This subject still interests me; just call it a bad case of blogger’s block.

So I will put my toe in the water once again and observe what the latest trends and figures are for ‘post apocalyptic’ over the decades by digging into Google Trends, Wikipedia articles, and Google Keyword Planner (an advertising tool).

Below is the graph from Google Trends showing the interest in ‘post apocalyptic’ searches since 2005:

What is interesting is the increase of both literature and films of this genre. For instance, a list of movies over time: 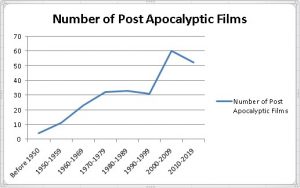 The chart below is rough (very rough) volume count of a Wikipedia article of post-apocalyptic themes through the decades. It is important to note is that for year, I used year the year of origin as some TV, movie, game and books series can cut across decades.  Below is a quick excel graph I whipped up after collating the decades from the above article:

More specifically, below are some keywords taken from post apocalyptic searches per month from Google; it shows a pretty strong interest in the arts, including fiction, film, games, television and fashion. Not outrageously high number counts, but it displays that there is still a healthy interest in the subject matter.

So based on these rough indicators gleaned from online research tools, it looks like post apocalyptic interest, especially in the arts, is increasing. The only caveat would be that perhaps original work is on the decline, with a greater emphasis on serialised content.

Is this a bad thing? Some very popular films and games spanned decades such as Mad Max (1970’s, 1980’s, 2010’s) and the Fallout Video Games (1990’s, 2000’s, 2010’s). A few have jumped genres across across the decades, such as the Walking Dead – from comic book to TV series. Whilst there is debate whether sequels ruin the original, I do think the cases above the content has remained fresh. That is a testament that the genre is standing the test of time.