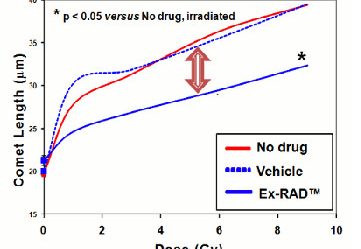 In 2010, a product known as EX-RAD made headlines that it can reduce damage from radiation exposure. It was one of those cases where science fiction actually turned into reality, as Rad-X was the name of an anti-radiation drug from the post apocalyptic game series Fallout released 13 years prior.

Interestingly enough, the drug developed may be even better than the one developed in the video game; it can heal radiation as preventative measure and post exposure. In Fallout, Rad-X is taken prior to exposure while another drug Rad-Away is taken after exposure. EX-RAD can effectively deal with both problems:

Results from the radiomitigation experiment (where the drug is administered after exposure to lethal radiation), using both injection and oral methods of delivery demonstrated that Ex-RAD® treated animals had comparably high rates of survival in both groups.

Hence, oral Ex-RAD® was found to be effective in both prophylactic pre-treatment and mitigation post-treatment settings. Source.

Onconova Therapeutics,  the Pennsylvanian company that developed this drug in conjunction with the US Department of Defense has find an interesting way to to deal with radiation poisoning: Instead of stopping the cell cycle or scavenging for free radicals, it opens up a mechanism to sense damage and repair DNA pathways. The CEO and co-founder of Onconova, Ramesh Kumar, believes this is a better method than scavenging free radicals, as they are short lived and would narrow the window of opportunity to make the drug effective.

How well does it work? Below is an image of the DNA comet assay, which is a way of measuring DNA damage. In this test, the longer the length the of comet, the more damage is done.  here we can see that Ex-RAD reduces the length of the comet tail. 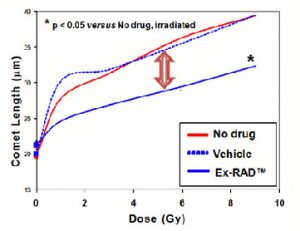 The lethal dose of radiation for humans is about 4.5 Gy.

So where is EX-RAD today? According to the website 4 trials have been completed in Phase 1 and is currently seeking additional government funding. Typically, there will be 3 more phases after this. A quick overview of these phases are:

As it is still in initial phases, it may be a few years yet before it goes to the market. It takes an average of  12 years for a new drug to go from lab to pharmacy.

Here are some additional facts about the drug:

Onconova Therapeutics is listed on the NASDAQ as ONTX. It was founded in 1998 and became publicly listed in 2013.