I’ve recently had problems with expired film in 126 Cartridge – it wouldn’t wind and would get stuck before the first frame. I have 8 cartridges, I’ve shot 3 but I’ve had 3 cartridges which seemed jammed. I really was hoping that it wasn’t my SL26 camera – as it turned out, thankfully, it wasn’t. So if you are trying 126 film (thats very expired) for the first time, this post may be useful.

What seemed be be happening was that the tape holding the film to backing paper had become undone (the film is 26 years old, so its not unlikely the tape just doesn’t become sticky and more. When winding the film, it causes a ‘log jam’ and won’t advance the film from one side of the cartridge to the other.

It could also be that I have had the film in the freezer since I bought and perhaps some condensation made it through the protective foil holding the cartridge.

Unfortunately I couldn’t rescue the ‘jammed’ film, however for the next cartridge, I tried something different. Instead of winding the film in my camera, I wound very slowly with a fifty cent coin (any coin will probably do). I was slowly able to come through most resistance until the tape section came out. The tape was frayed at the end, so I cut it off with a hobby knife. I then put a new piece of tape over the old and popped in the camera and Viola! – it went to the first frame. 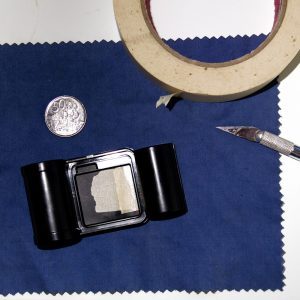 So while this won’t rescue films that are jammed in the cartridge, if you are working with very expired cartridges you might want to manually wind them first. Disclaimer – I’ve manually wound 3 films so far and was able to rescue 2 of them – so 2 out 3 ain’t bad?