For those who want an simple way to dive into home negative developing, I can’t think of an easier way of getting started than to get your hand on the Agfa Rondinax 35U. 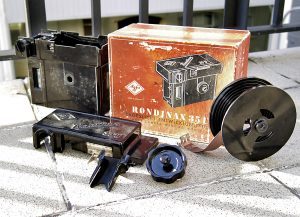 The Awesomeness of the Rondinax

The Rondinax 35U is daylight film developing tank, meaning that you don’t need a darkroom for developing 35mm negatives. For those people who previously have used traditional plastic / steel tanks to load film, you are are in for a treat:

So whats bad about the Rondinax? There are a few things to consider:

Other Stuff ’bout the Rondinax:
What amazes me is these boxes has been around for 50+ years. It was based of a patent by Ernst Leitz dating to the late 1930s (ever hear of Leica?) and the design and use is very efficient and user friendly. Later Leitz partnered with Agfa to make Rondinax that I use. Here is a great link on the Rondinax‘s history, though you’ll have use a translation program as its in Francaise.
What should you pay for your Rondinax? Its a bit of a mixed bag – I have paid as much as $100NZ (for the first one) and recently I pounced on a $40 Buy Now on Trademe.co.nz. You can see cheaper Rondinax’s on Ebay, but by the time you are done with shipping and exchange rates the price comes closer to $80NZD. Note, if you do see one on Ebay, don’t be afraid to ask the seller if they will ship it to NZ, even if its plastered on their listing that they will not ship overseas. I’ve found most sellers will actually ship to NZ (must be some of that Hobbit charm).
If you are looking for a rondinax manual, click here. If you are looking for more detailed how-to of using it, check out this superb Rondinax introduction from aperturepriority.co.nz. Unfortunately, I haven’t been able to find any English videos of how to use the Rondinax 35, but if you do find one, make sure post it in a comment here.

A couple of final tips:

Parting Thoughts:
This is a very well designed daylight box – its perfect for beginners or extremes amateurs such as myself. Though I may overpaid for my Rondinax, I am reminding of the words of Gucci who said “Quality is remembered long after the price is forgotten”.