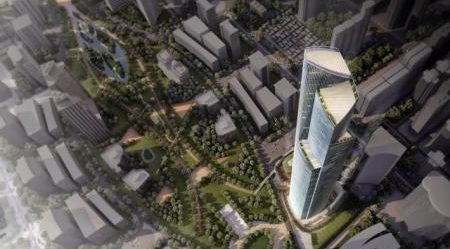 I get the newsletter from Sovereign Man (it’s sort of an investors opportunity guide for the coming economic collapse) and there was interesting article about New Guangzhou – one of several Chinese cities built from scratch to showcase China’s economic strength. Does this mean that China’s economic tiger is on a roll? Not quite, according to Tim Staermose. It may well be the world’s largest ghost town, a ghost city of apocalyptic proportions. New Guangzhou is just one of several cities that have been built for the masses, but the masses are not living there.

Here are some of the beautiful concepts of Chinese planned cities via: http://vincentloy.wordpress.com/2010/08/28/new-guangzhou-east-tower-unveiled: 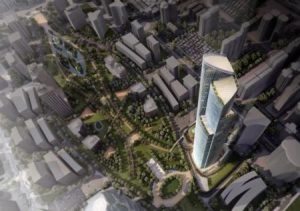 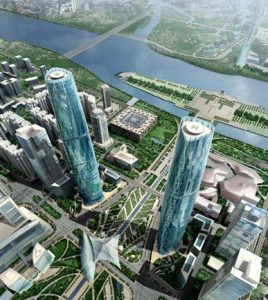 Here is the reality of what is becoming of them (Ordos pictured below) from businessinsider.com: 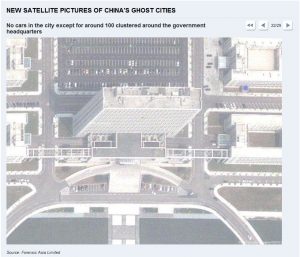 Here’s what it written about New Guangzhou on the Sovereign Man blog:

Guangzhou South Station is absolutely COLOSSAL. By comparison, it is much bigger than any of the 3 international airport terminals in Manila where I live… and I’d say it’s over 8 times larger than the Central Airport Express Station in Hong Kong.

For a start, the Guangzhou South Station is built on THREE levels. I was dropped off at level 2. When I entered there was an “Information” booth straight ahead. It was unstaffed. In fact, the entire second level was completely deserted. Very spooky. It was something out of a low-budget zombie movie.

I went downstairs to the ticketing area where there were a few signs of life. Of the forty or so ticket windows, well over half were closed, and there were only a few dozen people mulling about. To give you an idea of density, imagine the largest football stadium you can think of with only a few hundred people inside. Ghost town…

Now, you’d think that if they spent so much money building a station this large, they would be expecting hundreds of trains steaming in and out at all hours of the day. Not by long shot. There was only one train at the platforms. Mine.

It was the same zombie movie theme– areas the size of multiple football fields with hardly any passengers standing around. And yet, throughout the entire station over all three levels was expensive, high quality marble tiles and artistic finishings, all polished to a mirrored shine.

Guangzhou South Station is truly a monument to excess, exemplifying China’s ruinous “build it and they will come” attitude.

When I arrived to Wuhan about 4-hours later (going 300 km per hour on the high speed bullet train), it was the same theme: acres of empty space, hardly a soul in sight, yet all very modern and marbled with dozens of elevators and abandoned information booths. When my train pulled in, it was the only one at the platforms.

Frankly, the whole episode reminded me of Bangkok and Hong Kong airports during the SARS epidemic back in 2003. I observed this firsthand– passenger traffic cratered because most people were scared silly of catching the deadly virus, and major airports were practically empty.

Similarly, it’s what you would expect Grand Central Station to look like after a flesh-eating virus outbreak.

According the video posted above, these cities are like the pyramids of Egypt; showing off the might of the builders rather than benefiting its inhabitants. These cities are too expensive for many Chinese to live in, so they will probably remain unpopulated.