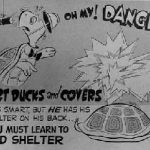 Got a newspaper? Protect yourself from nuclear blasts and the such, just duck and cover like Bert the Turtle:

Duck and Cover was a civil defense film (sometimes also characterized as a social guidance film or propaganda) produced in 1951 (but first shown publicly in January 1952) by the United States federal government’s civil defense branch shortly after the Soviet Union began nuclear testing. Written by Raymond J. Mauer and directed by Anthony Rizzo of Archer Productions and made with the help of schoolchildren from New York City and Astoria, New York, it was shown in schools as the cornerstone of the government’s “duck and cover” public awareness campaign. The movie states that nuclear war could happen at any time without warning, and U.S. citizens should keep this constantly in mind and be ever ready.
The US government contracted with Archer to produce Duck and Cover. The film is now in the public domain, and as such is widely available through Internet download sources, as well as on DVD.