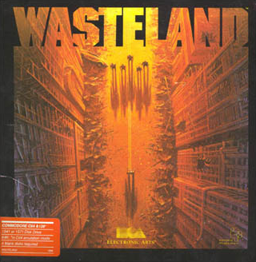 Ah the the Wasteland, the original game. Though probably unplayable for those who enjoy 3d splatter brain graphics, its the grandfather of all post apocalyptic computer games. From Wikipedia:

The game is set in the middle of the 21st century, following a nuclear war between the United States and the Soviet Union. Parts of Earth have been turned into a “wasteland” where survival is the paramount objective. Players control a party of Desert Rangers, a remnant of the United States Army based in the deserts of the Southwestern U.S. that survived the nuclear holocaust, and are assigned to investigate a series of disturbances in the desert. The party begins with four characters, and through the course of the game can hold as many as seven characters by recruiting certain citizens and creatures of the wasteland to the player’s cause. Throughout the game, the player explores the remaining enclaves of human civilization, including a post-apocalyptic Las Vegas.
You can read more about its inner workings here:
http://wasteland.wikispaces.com/
and even download wasteland right here. Its less than megabyte (671 bytes), but if you are into retro computer gaming, its a megaton of fun!

Here’s a look at the ‘old school’ graphics: