Previously I posted about a Lincolnshire nuclear bunker for sale for about $11, 000 USD. Thats an absolute bargain, opportunists in the US are selling their ultra deluxe doomsdoay bunkers for up to $20 million dollars. Here’s the latest article from CNN.

Vivos, a company that sells rooms in 200-person doomsday bunkers, has received thousands of applications since the massive earthquake in Japan, with reservations spiking nearly 1,000% last week. And people are backing their fear with cash: A reservation requires a minimum deposit of $5,000.

“People are afraid of the earth-changing events and ripple effects of the earthquake, which led to tsunamis, the nuclear meltdown, and which will lead to radiation and health concerns,” said Vivos CEO Robert Vicino. “Where it ends, I don’t know. Does it lead to economic collapse? A true economic collapse would lead to anarchy, which could lead to 90% of the population being killed off.” 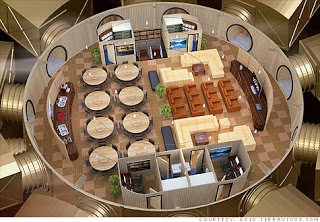 Here’s the video, you’ll have to fast forward through the advertisement unfortunately: