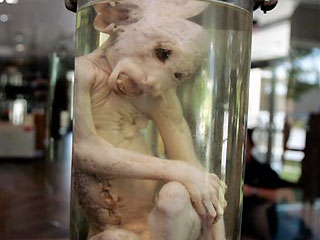 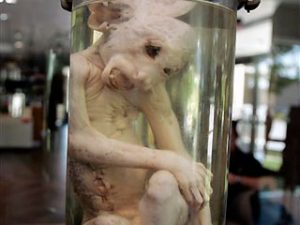 Here’s a strange little story about a UFO hoax that took place in Georgia, USA during the 1950’s. A dead, exfoliated and tail-docked monkey was used to play a practical joke on gullible UFO believers.

This story was taken from here and of course wikipedia.

At the height of UFO hysteria then sweeping the nation, two young barbers and a butcher took a dead monkey in 1953, lopped off its tail and applied a liberal dose of hair remover and some green coloring to the carcass.

Then they left the primate on an isolated road north of Atlanta in the pre-dawn hours of July 8, 1953, burning a circle into the pavement with a blowtorch before a police officer came around the curve in his patrol car.

“If we had been five minutes earlier, we would have caught ’em in the act,” said Sherley Brown, the officer who happened on the scene.

The barbers, Edward Watters and Tom Wilson, and the butcher, Arnold “Buddy” Payne, told the policeman they came upon a red, saucer-shaped object in the road that night. They said several 2-foot-tall creatures were scurrying about and the trio hit one with their pickup before the other creatures jumped back in the saucer and blasted skyward — leaving the highway scorched.