Since diving into Polaroid photography last September, I searched the internets for sound advice looking for how to shoot polaroid film. I found very little helpful hints except for ‘Keep shooting them, and you’ll eventually get better’. While thats true, given the price of the film, some practical help would be more than welcome.
This blog entry is aimed for beginners such as myself. Though I am used to shooting digital SLR, I found that I still had to learn quite a bit about photography.
This is specifically for integral film (the kind that develops before your eyes) – such as the one picture below: 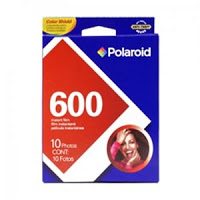 1. Shoot the bloody film! The film is only going to get older and the battery inside the film may go flat. A shitty Polaroid taken is better than Polaroid not taken at all 😉
2. Keep the film refridgerated but not frozen. This helps preserve the batteries. If my camera still has film in it, I wrap my Camera in an airtight bag and put it in the cooler. Note, Fuji Instax film doesn’t require this as it doesn’t have battery within the film. Keep it away from the Pork though, unless you like the smell of leftovers on your camera…
3. Don’t leave the camera open If its a one step camera you will see a green light on if its open. This will drain the film batteries. When the batteries are flat, I am not sure of any easy to resuciate the film and you will not be able to use the camera.
4. Shoot in sunlight. Despite Polaroid is fast film (ISO 640), shooting in full often yields best results. But don’t expect super sharpness from this film – having such a high ISO rating often means that results are grainy. Here are some blunders that resulted from low light situations:
Shooting at early morning may lead to blurry results like below; some sort of stabalisation is recommended: 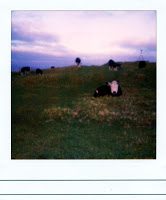 Shooting in Evening/Night may result in shots like below. It was actually twilight, but the picture made it look darker than it was. Stabalisation would have been helpful : 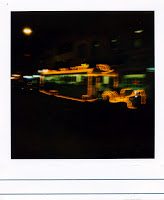 5. Use your flash with caution: This sequence of shots show to show you how flash can affect your shoots:
Shot 1 – No flash. The Camera was on ‘darkest’ setting which was my mistake. It was slightly overcast day but it made it look more like night. 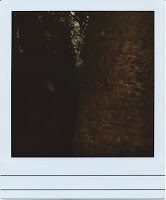 Shot 2 – With flash. I adjusted the camera brightness settings back to normal and took a shot. As you can see a bit too strong. I could have positioned myself further away, but i wouldn’t have been able to frame the shot the way I wanted: 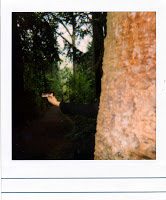 Shot 3. Partially Covered Flash. Too weaken the flash, I held my left index finger over 2/3s of the flash. This was just the right amount of flash to light the foreground without bleaching it out.

6. Polarising filters are helpful – this may add even more contrast (Polaroids have strong constrast) but will make the colours stand out. 90%+ of my shots use a granny-rigged polaroid filter in front of the lens. Below is an example of punch in colours a polarising filter can give to a polaroid: 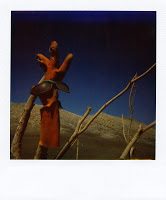 7. Your rangefinder lies on close ups. Ok it does to all range finders. But given the price of polaroid films – be very mindful of this. This shot was supposed to be a light bulb in front of the rising sun… I was too close to the bulb and misjudged the object through the range finder: 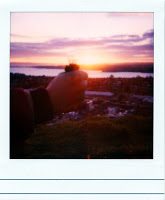 8. Post Processing in Photoshop – Even more so than with digital, levels on Polaroid can do wonders. Scans often have poor contrast, and below Is an example of what Photoshop Autolevels can do to Polaroid image (original scann on left, autoleveled image on right):

9. Be prepared for unexpected results! The worst part of Polaroid integral film is inconsistency; however this is the best part of the film too. Just embrace that your shots, for better or worse, will always be a surprise! The below shot was taken of a four leaf clover… and it had an unexpected gold aura around it. 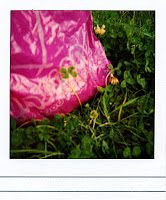 If you are looking for samples polaroidic inspiration I recommend visiting Polanoid. Also, If you have any thing you want to add, by all means please comment below.