I had bought some 669 film expired from 2004. I had previously used expired film (in fact I think all my pack film I’ve used has been expired – even the Fujifilm) .

Below is the result of woes of getting a bad pack film. The pitch black parts is the negative part, but the pinkish to dark greys are the positive images. So I wound 10 crap images, the entire pack was munted. It was part of 20 pack of 669 I bought from ebay for about 35 NZD.  Unfortunately the prior pack also was defective. However, I was happier with the results from 779 integral film i took earlier.
Yep – Polaroids are an expensive hobby. But its better than cigarettes, drugs or alcohol (and cheaper, for now). All you need is one great shot and all the shite that you snapped before becomes a distant memory. For all my years of digital photography, I find shooting polaroid much more satisfying. 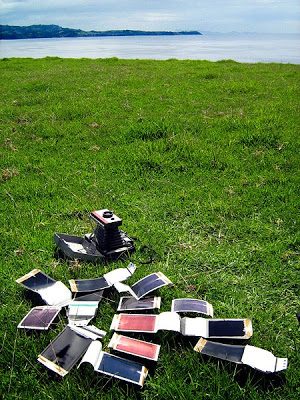 By the way, if you are in NZ, I find that Trademe suppliers (and Ebay AU) overcharge for their polaroids – its best to find bargains on Ebay and do the maths with the exchange rate and shipping costs you’ll get much better deals.
Beware, you could get results like the above, but just take it in stride and keep a back up camera with you 😉