One of the great joys of taking photos is shooting outdoors, and even more so, seeing all the worlds it opens up.  Sometimes you see rocks and landscapes create perfect tiny worlds, or as Blake said ‘To see a World in a Grain of Sand‘.  Here are a few things that have helped me shoot miniatures over the years.

Choosing the your models

Most of models I’ve used are either HO scale or 1/18 scale. The sizes come with their own advantages and disadvantages; however the scale should fit the scene (landscape) your shooting. 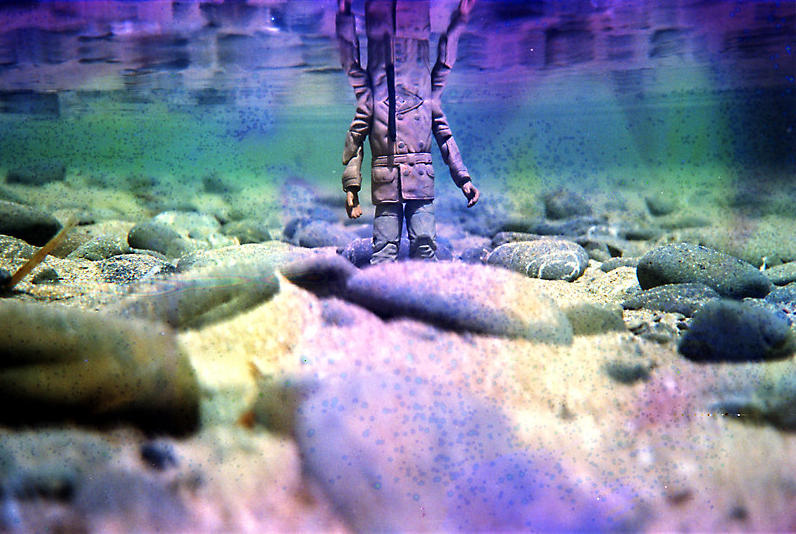 These are commonly between 3.75″ to 4.00″ inches tall. These are great for starting out as they have to some advantages: the limbs are flexible, there are many accessories available, and you likely will not a macro lens – just a regular should work for most of these figures.

Having flexible limbs means you can set up different poses and neatly fit them in many different situations. You can also configure them to interact with other action figures (eg shaking hands, dancing etc).

In addition, there is a plethora of accessories available – including a wide range of dollhouse furniture.

The larger size also means you will not  need a special lens to shoot them; in fact I never used a macro lens or close up filters for this scale.

There are few drawbacks: 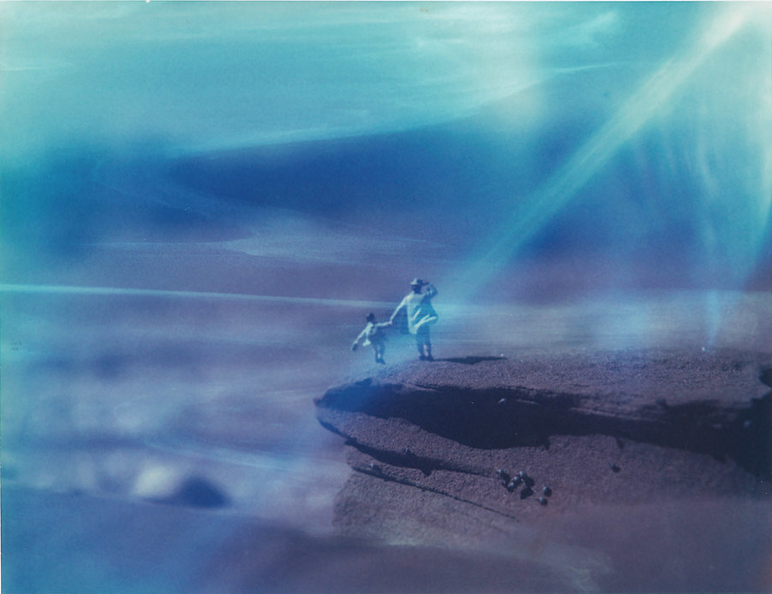 These are tiny figurines and models that come with trainsets. These have and advantage in there there is so much variety to choose from, I get giddy when I go online or walk in hobby shops when I see the possibilities.

Unlike action figures, these come in a dazzling array genders, outfits and possibilities. You can also larger set pieces at good prices – these can include houses, vehicles, animals, trees, and even miniature electric lighting! You can spend hours looking at HO scale models and accessories on eBay!

Unlike action figures – the models do not have flexible limbs, so the pose you get out the box is the pose you are stuck with, unless you want to modify them.

At this size, shooting with a default lens (even 50mm lens on film) can challenging. With film, I typically always use a close up filter or macro lens, with the exception of when I use my large format 4×5 camera.

Here is a quick comparison chart of the scales:

Is one scale better than the other? Definitely not! It depends on ‘landscape’ they are situated in.

Setting up the outdoor scenes

I generally like to find miniature landscapes that could be mistaken for ‘life-size’ landscapes if you use the correct perspective. I am fortunate that I live close to several beaches that provide ample opportunities for such locations. These scenes typically have unique rock formations, tidal pools, or micro vegetation (such as moss) that can be used for a bit of Trompe-l’œil.

Some examples and explanations:

Below: This was shot on a black sand beach with 1/18 scale model. There was a piece of buried driftwood that mimicked a decimated forest in the dunes of Whatipu. 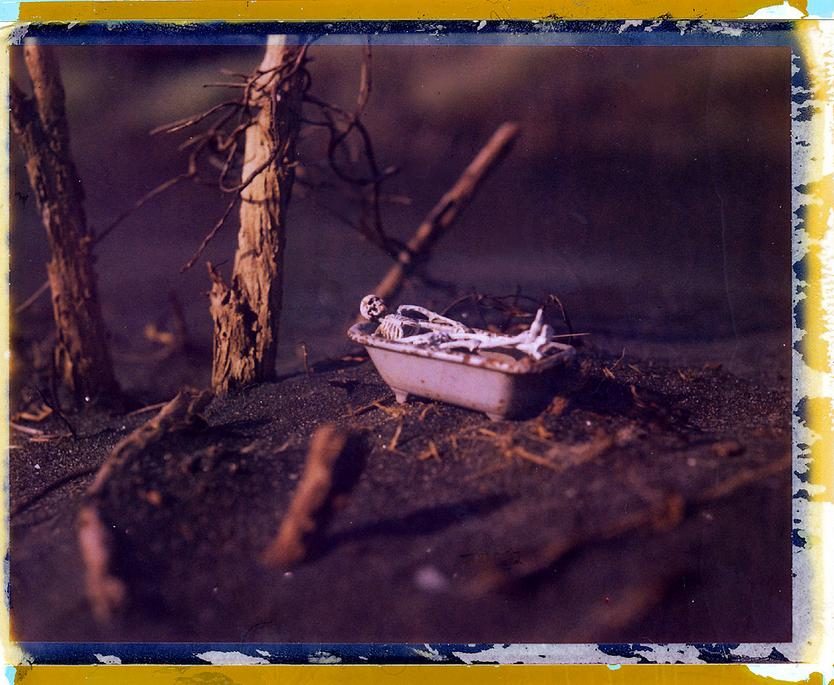 In this shot, I intentionally used a short depth of field to blur out the subject. The foreground was actually sea moss on top of a small boulder, but it looks like clumps of mowed grass. This was with an HO scale model figurine. 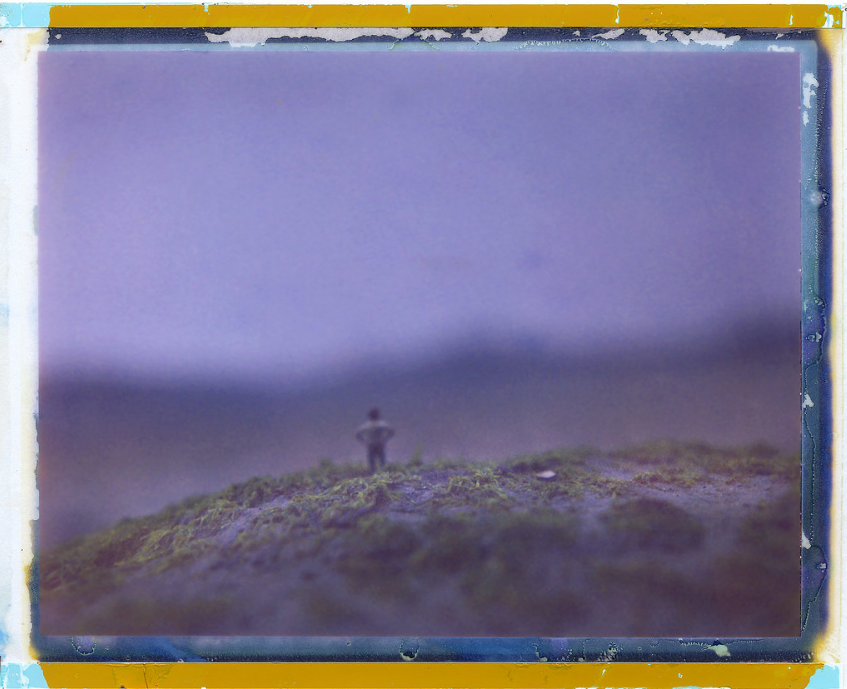 In this scene, a 1/18 figure action figure pushes a stuck vehicle out of a small stream, in this case a tidal pool on one of Auckland’s west coast beaches (Armour Bay Reserve). 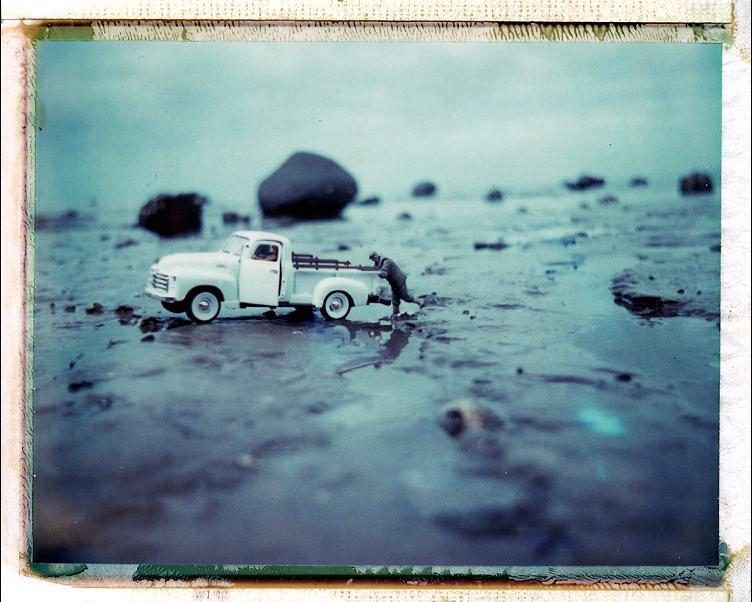 Surreal landscapes can be found anywhere. This HO scale figurine is wearing a Hazmat uniform as he ponders the alien landscape in Sandspit, Auckland. This was taken on a weather-beaten rock nub during low tide. Incidentally the yellow line running on top of his head is an artifact of the expired film, not post processing. 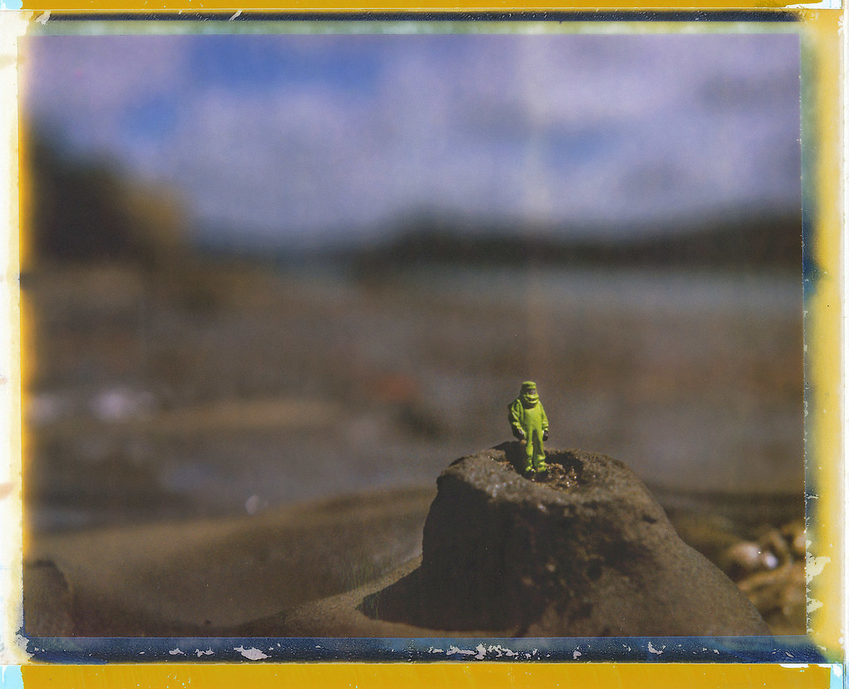 Its important to not forget about perspective. Here are two shots I took of a miniature gondola shot at Mill Bay in Auckland. The first shot I didn’t consider the background and the  scale of the trees, making it less unsuccessful as a Trompe-l’œil photograph. The second fairs better in this regard. These where shot with 1/18 scale action figures. 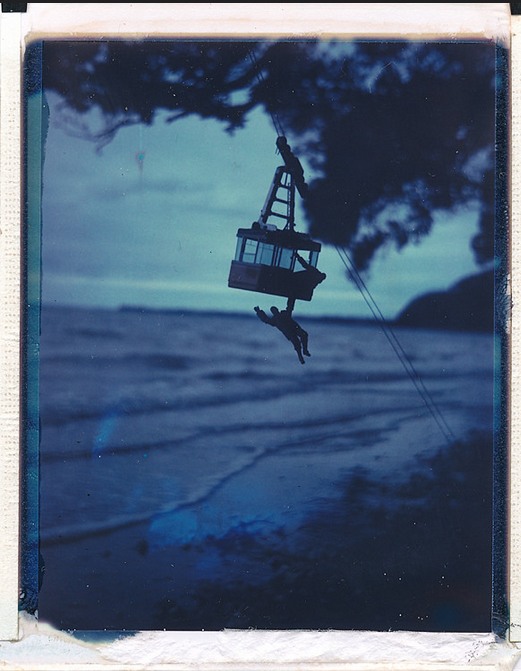 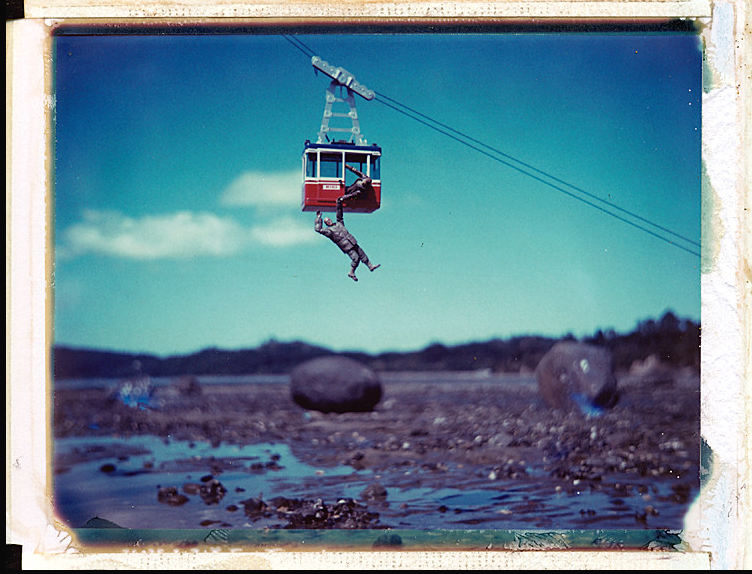 Note not every outdoor miniature needs to have a perspective in reality, this is one my favourite shots, influenced by the German painter Michael Sowa taken at Cornwallis Beach in West Auckland: 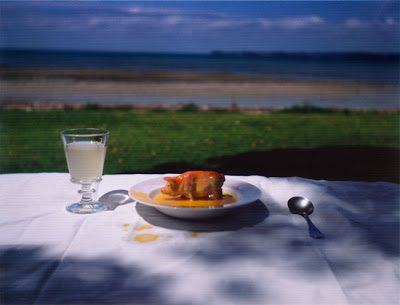 Shooting in a studio

When I say studio, I really mean a cramped, makeshift office (you work with what you have!).  Generally, its not normally my thing to indoors, but I was very curious of how this would work since I loved the work of artists like Lori Nix and Kathleen Gerber who made beautiful elaborate sets.

My shots were a little less elaborate but did make use of a few materials an creative staging.  Here was my set up for most of the shots:

The picture below was one of my first efforts. I used a photo from Bethell’s Beach as a back ground, the foreground was piece of polystyrene. I used spray glue to put black sand as the earth, and stick that looked like a tree for the prop that my HO figure leaned up against. 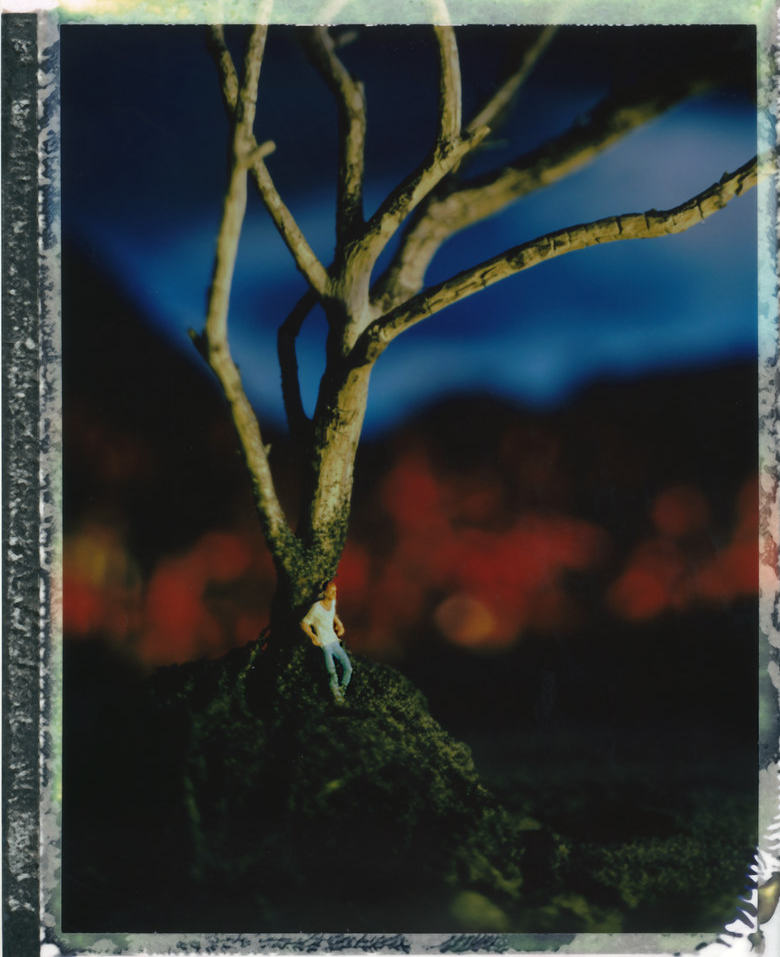 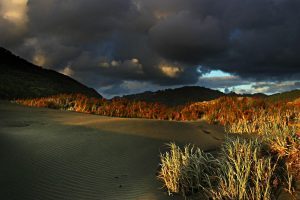 This next photo uses a background I shot from Raglan, New Zealand. The green grass is a actually a roll of fake grass I bought at a hobby store, and HO figurine mowing the grass. 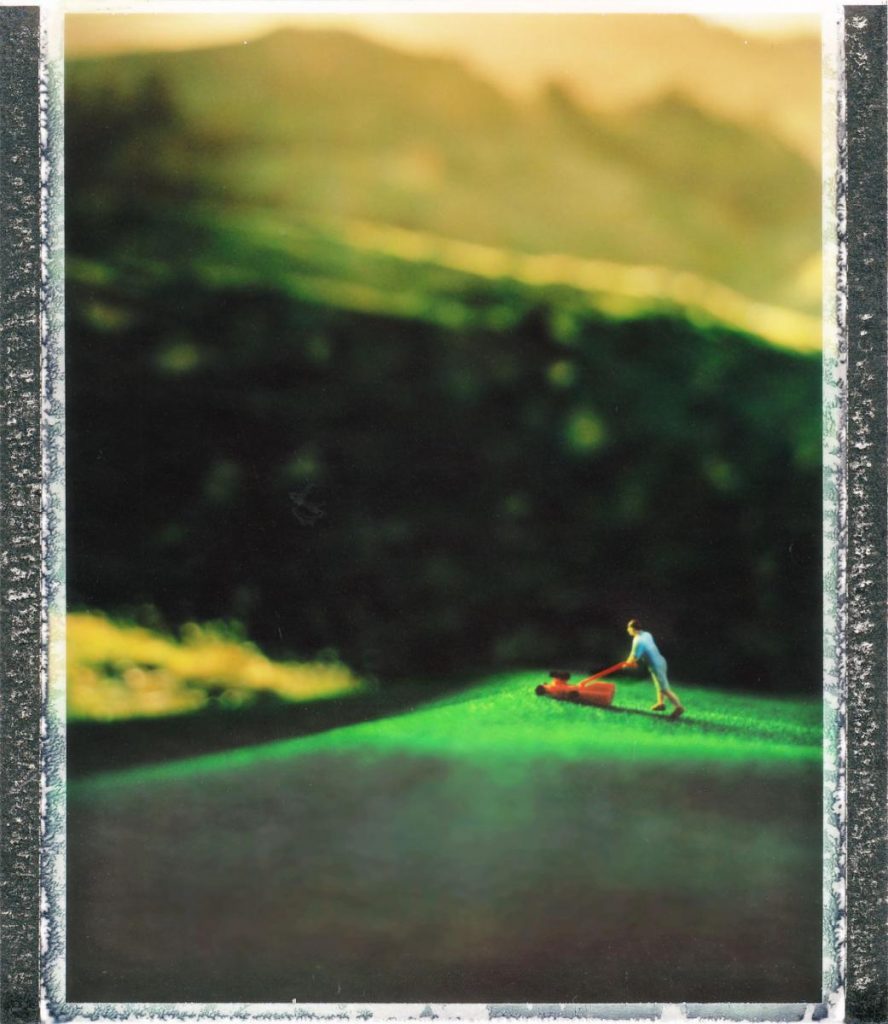 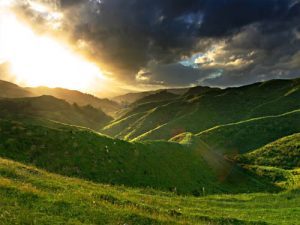 background for mowbody, shot near Raglan

Finally not all my miniatures were HO Scale or 1/18 – I had a 1/6 scale doll (about 12 inches/30.5 cm) that was part of a test shoot for Outlier Cartel. Of all the images here, it was the only shot on digital.  Since this model was bigger, I used my television as a backdrop. The background image is from the Fallout4 video game. Lot’s of little props here include kumera, a mailbox, beer bottles, a gasmask and more. Surprisingly this was a lot harder to shoot because of the lighting requirements and perspective. While I liked the shot, I wanted a lot more landscape in it to give it a sense of scale. In the end, we opted to hire Lori Nix and Kathleen Gerber to do the shoot for us, and it was a winner. 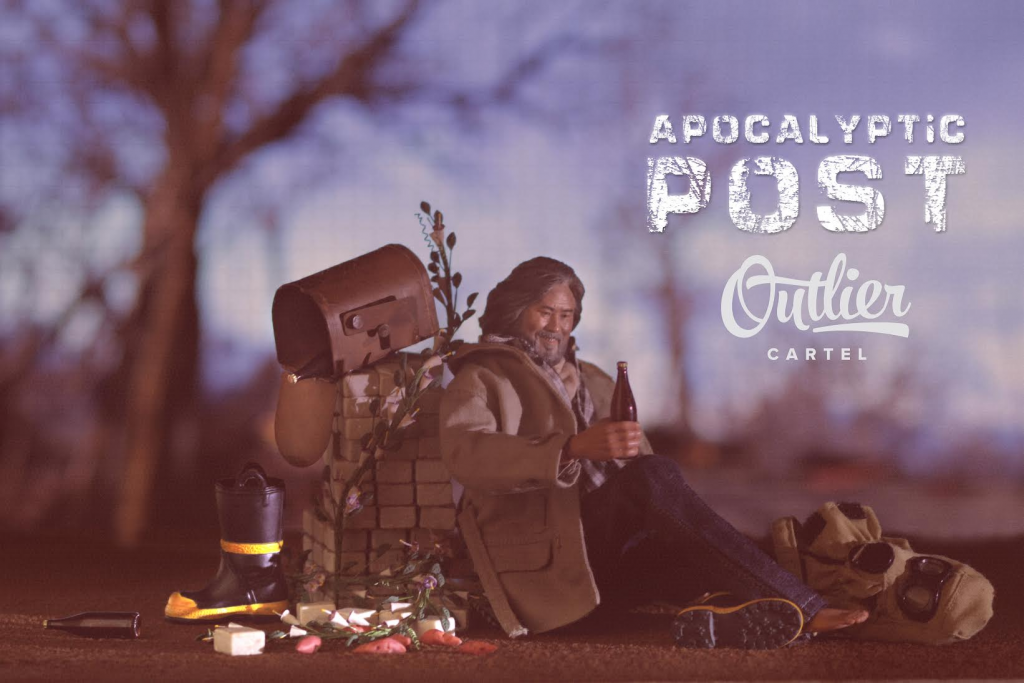 There is of course, a lot more to shooting miniatures than what I listed here. I love shooting miniatures, particularly outdoors because it forces you to examine your surroundings more carefully. Overtime you come to notice the world is full of delightful landscapes, large and small!

As for influences,  I draw inspiration  Tatsuya Tanaka, Lori Nix, and Kurt Moses. In addition, as a kid I also thoroughly enjoyed playing with action figures outdoors (some would have been worth quite a bit money had I taken care of them). Part the fun of shooting miniatures is getting to be a kid all over again! 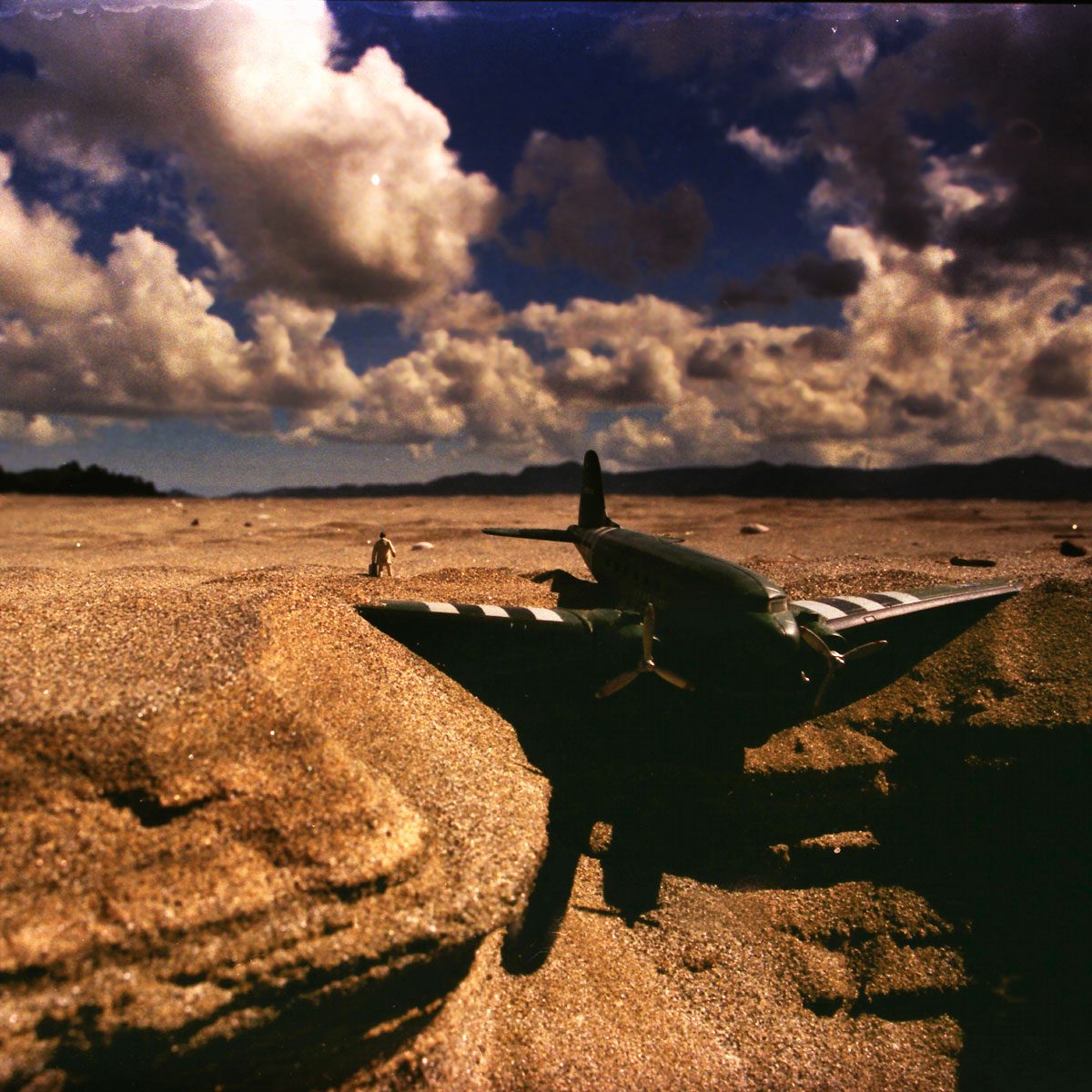