This is a stretch for Lake – it is really an ocean, but I am just running with the idea though thematically incorrect. Recently, Zealandia was confirmed as sunken continent. While Aussies may have you believe they are just a chain of islands off their coast, the truth is more complex. New Zealand actually lies smack dab in the middle of a 94% sunken continent known as Zealandia. Here’s a quote from the above explaining the new thinking about what Zealandia actually is:

“The idea that continents extend out to continental shelves – that they don’t just stop at the shoreline – is something quite new to non-geologists. Once you accept that and you look at a world map, it is quite obvious there is a relatively high standing area of sea floor all around New Zealand. There is a coherence and a tangible reality to it – rather than being remote islands in a modern-day context or in a Gondwana reconstruction context, Zealandia is something you can draw a line around. It is a definite part of the Gondwana jigsaw puzzle.”

The proposed Maori name of Zealandia is Te Riu-a-Māui. This translates to “hills, valleys and plains of Māui”. So to honour the legend of Maui, I sketched Maui tossing his fishnet over a small part of Te Riu-a-Māui/Zealandia.

This sketch was made with pencils and coloured pencils. 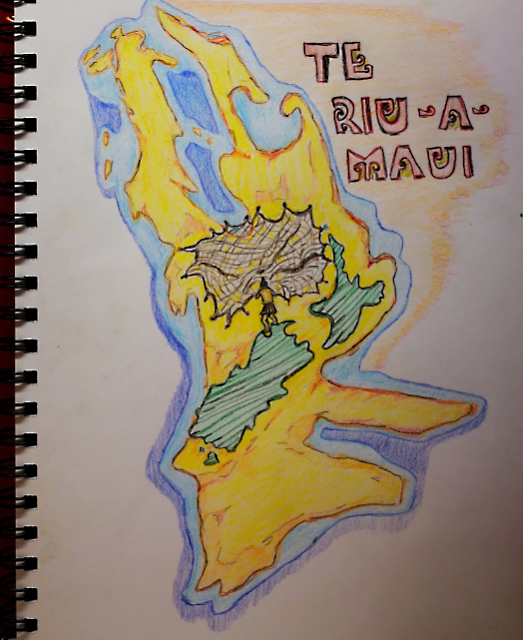