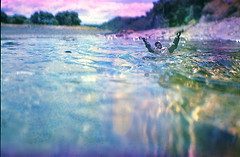 End of the Beginning
Originally uploaded by Parahanga

2 weeks ago, I was using my lovely Konica Mermaid camera to shoot action figures underwater. Unfortunately, I had somehow dislodged the the waterproof backing while I was underwater, flooding the camera. The camera electronics died and even the film was exposed to salt water.

I thought surely someone out there on the internets who would have posted whether salt watered exposed film was salvageable or not. I couldn’t find one.

The film was not able to be rewound by the electric rewind. I opened the camera in the dark. I could feel the salt water on the film. The film was in the camera, exposed to salt water for about a full day. When I eventually decided to take out the film in my darkroom, I felt the saltwater run off the film.

Anyways, I had my Colortec chemicals on hand and decided to give it go. I even push developed the film (going an 45 secondss beyond recommended developing time). I was surprised as anyone to to the see the results – you can go to my Flickr photostream to see the rest of the shots from my now defunct Konica Mermaid.