In October 2008 I bought my first Polaroid camera, previously my passion for photography had waned quite a bit. I shot mainly digital, while it was fun and easy… there was just something missing. Maybe digital photography is a bit too clinical, I don’t really know. I still have 4 gigabytes on digital photos on my flash card from my European trip in 2007. I never really bothered to upload or do anything with them.

Anyways, I heard that Polaroid was going out of business so in October 2008 I bought a OneStep Camera for about 60NZD and 3 packs of film for $100NZD. I figured I give it go, I remember growing up we took alot of holiday snaps with Polaroids and they where great fun – though picture quality wasn’t as crisp as either film or digital.
I must say I got hooked ‘instantly’. I think Polaroids serve that void between digital and analogue. Digital film provides instant pictures but not prints. Film must be processed to get the prints. Polaroids offer prints instantly. The also add character and ambience to prints that digital doesn’t readily give (not without long efforts in Photoshop unless you count cheap and dirty hacks like Poladroid).
Anyways, this year has been magical for me. I have churned through 100s polaroid prints this year – mostly crap photos but at least its crap with a bit of charisma. Every shot was a bit unpredictable and a learning experience. I bought about 7 Polaroid Cameras this year. 2 of my favourite cameras (ee55 and Macro 5 SLR) broke down on the same day.
This September I started to shoot some miniature action figures, I had heaps of fun with them. But it came with great surprise that on December 17th, the first shot I ever took with the actions actually won Polanoid Shot of the Day. Its quite an honour as the Polanoid site has some of the most talented photographers regardless of what medium they shoot. 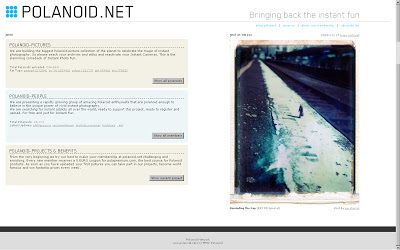 I am having my first photo exhibition in New Zealand this coming January – They are actually reproduction and enlargements of my Polaroids (with a couple originals thrown in). I’ll update the blog with exact dates and times.
In a few hours, I am flying to Vienna with my partner to see family and friends. Vienna is the heart of polaroid revival. In so many ways I feel my photograpy has gone through a bit of rebirth as well thanks to Polaroids.
I’ll be back in January – I have several Polaroids to scan when I get back. Until then – I wish you all the warmest of holiday greetings and thanks you encourage the past years. May your 2010 be filled with amazement and wonder – see you then! ~ Parahanga