As a contination of the nuclear explosion theme, this if the art of Gunnery Sargeant Grant Powers – excerpt from site:

In contrast to all later atmospheric nuclear tests, a large media contingent was present for the two Crossroads detonations. They were allowed to cover the test atomic bomb explosions “with sufficient thoroughness to satisfy the public as to the fairness and general results of the experiment.” Quartered aboard USS Appalachian (AGC-1), 131 newspaper, magazine, and radio correspondents from the U.S., Australia, Canada, France, the Republic of China, the Soviet Union, and Britain covered the detonations, turning these experiments into major media events. In addition, the three artists presented here also recorded the project: Gunnery Sergeant Grant Powers, USMC, was the official combat artist for the operation while Lieutenant Commander Arthur Beaumont, USNR, and Captain Charles Bittinger, USNR, were observers. 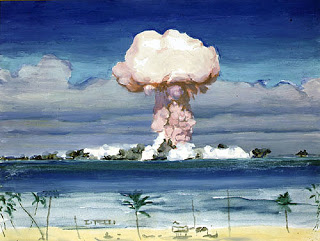