These days Vikings are pillaging the world’s seed supply (with the approval of all nations) so the world can replenish its plant life in case the of its annihilation here on earth.

A barren, treeless island in the Arctic archipelago of Svalbard may prove to be the last, best hope of agriculture in warmer, more fertile parts of the world. The first batch of 100 million of the most important agricultural seeds were placed into the doomsday repository there today. The Svalbard Global Seed Vault is buried deep within a frozen mountainside near the Norwegian town of Longyearbyen that perpetually cools it to –18 degrees Celsius (–0.4 degree Fahrenheit) with or without permafrost. Built to withstand all foreseeable disasters, including a recent earthquake that was the biggest in Norwegian history, it has room to protect at least 4.5 million samples (2.25 billion seeds) in its three man-made caverns.

“The opening of the seed vault marks a historic turning point in safeguarding the world’s crop diversity,” says Cary Fowler, executive director of the Rome-based Global Crop Diversity Trust, which led the project. “Crop diversity will soon prove to be our most potent and indispensable resource for addressing climate change, water and energy supply constraints, and for meeting the food needs of a growing population.”

Rice was the first staple to be stored in the vault—strains from 104 countries around the globe. Sealed in airtight foil packages and encased in boxes, the seeds will remain viable but dormant in the low temperature and humidity conditions.

Wheat, maize, potato, bean and even watermelon seeds will be placed in Svalbard in coming weeks. All told, 268,000 different varieties from Canada, Columbia, Mexico, Nigeria, Pakistan, the Philippines and Syria, among others, will be the first to enter the deep freeze.

The vault is designed to protect against global-scale disasters—human or natural—that could potentially wipe out agriculture. Similar local seed banks have allowed farmers to recover from recent wars in Afghanistan and Iraq as well as provided new varieties capable of growing in changed conditions, such as rice strains that thrive in fields that had been inundated with saltwater after the Asian tsunami in 2004.

“Gene banks are not seed museums but the repositories of vital, living resources that are used almost every day in the never-ending battle against major threats to food production,” says Emile Frison, director general of Bioversity International. “We’re going to need this diversity to breed new varieties that can adapt to climate change, new diseases and other rapidly emerging threats.”

Such gene banks are themselves vulnerable. For example, a typhoon in 2006 wiped out the Philippines’s national rice seed repository. “Unfortunately, these kinds of national gene bank horror stories are fairly common,” Fowler says.

The Svalbard Global Seed Vault is meant to be the backup of last resort, stocked with copies of different crops from national seed storage facilities. For example, the U.S. Department of Agriculture’s National Germplasm System plans to send more than a million seeds to the vault, including sweet pepper, squash and tomatoes.

In the vault’s cold isolation, the seeds can keep for hundreds and thousands of years—the grain sorghum alone can last for 20,000 years—effectively allowing agriculture to be restarted in the event of a global calamity, such as nuclear war or catastrophic climate change. But the vault will require some vestiges of human civilization to persist, if only to build the transportation to bring the seeds back out of their new icy home.

“The world’s crop gene pool contained in seeds is essential for increasing crop productivity; mitigating climate change, pests and diseases; and ensuring a genetic resource base for the future,” said Jacques Diouf, director general of the United Nations Food and Agriculture Organization, in remarks prior to the opening of the vault. “Seeds are the vehicle of life.” 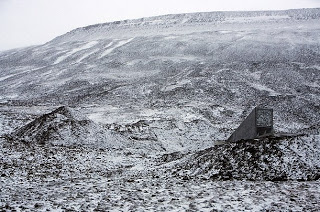 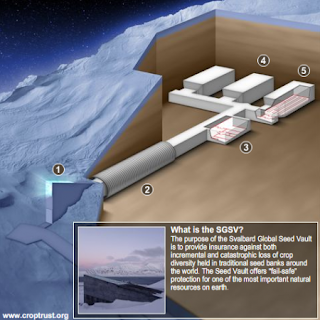 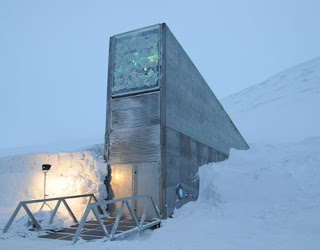