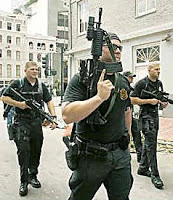 What happens when a metrotropolis turns into a failopolis? You let the mercenary groups take over of course! Here’s a an interesting story from ‘www.conspiracyplanet.com’that sounds like its right of some Hollywood Post Apocalypic Story line (found here via here):

Last week I had a chance to talk to a friend who just got back from Detroit, and boy did he get an eyeful of America’s Future. After listening to him describe Detroit, it’s obvious that it has all fallen apart.

First of all, there’s very little civil authority or regular civil government remaining and in operation. Almost everything has been turned over to these so-called Private Management Companies.

And this is how it’s being done. They block out areas, in which 80% or more of the houses have been foreclosed on, which happens to be almost the entire city and county.

They have selectively begun to bulldoze the properties which have been foreclosed on. The rest have been boarded up.

Then they have turned over management of these 100 block area to private companies which have become defacto governments. They have the literal authority of “governments” and they’re paid a flat fee from the city, county or state to “manage,” as they say, a square block of this urban wasteland.

These Private Management Companies sell themselves as residual property management firms. Most of these companies, as it turns out, are in fact off-shore subsidiaries of Private Military Contractors (PMCs).

They provide a catchall service. In other words, they regulate how much electrical power and natural gas flows through these areas. They also act as police force, and they act as management for local civil government.

However this Urban Wasteland Management has been pretty efficient. They want to protect what remaining wealthy areas that still exist, like Bloomfield Hills. These companies come in and effectively build large barbed wire fences, around these mostly abandoned square block areas.

Some people are still living in them, by the way, even though most of them are boarded up because they’re no longer bothering to serve process through the entire foreclosure procedure.

Oftentimes once the house has been taken back and is ultimately owned by the city or county or some government, they let the people stay there until it’s abandoned and then taken over by squatters. Then they’re given a 72 hour notice to leave, by this private management company — before they come in and bulldoze the house.

If you’re not out, that’s it. The bulldozers run. They can bulldoze the place with you in it — with legal impunity.