An hour North of Los Angeles, there is an interesting ‘abandoned’ house. The house was done as a contribute to the end of Polaroid:

Find out more about the project here and here:
from: http://www.holgablog.com/2009/05/05/the-polaroid-house/

edward and after that, when did the house start becoming adorned with the polaroids?
kim it became “The Polaroid House” on June 9, 2008, when jena, chinako and i went out there to leave my polaroids.
edward what was the concept of the house? how did you see it as a medium for art?
kim the concept revolved around the recent demise of polaroid film. i love polaroids and that announcement came as a shock. so the house was a tribute to polaroid and the slow decay of the past.
edward since then, how many times have you visited the house?
kim 5 times.

This photo is from part of the project, please see more work of the Kim here:
http://www.flickr.com/photos/depressiverealism/ 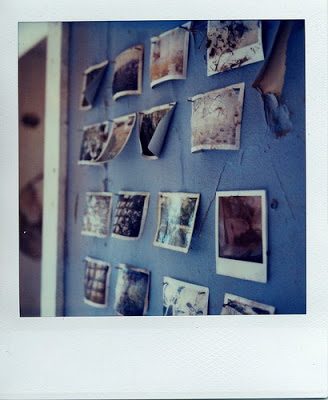